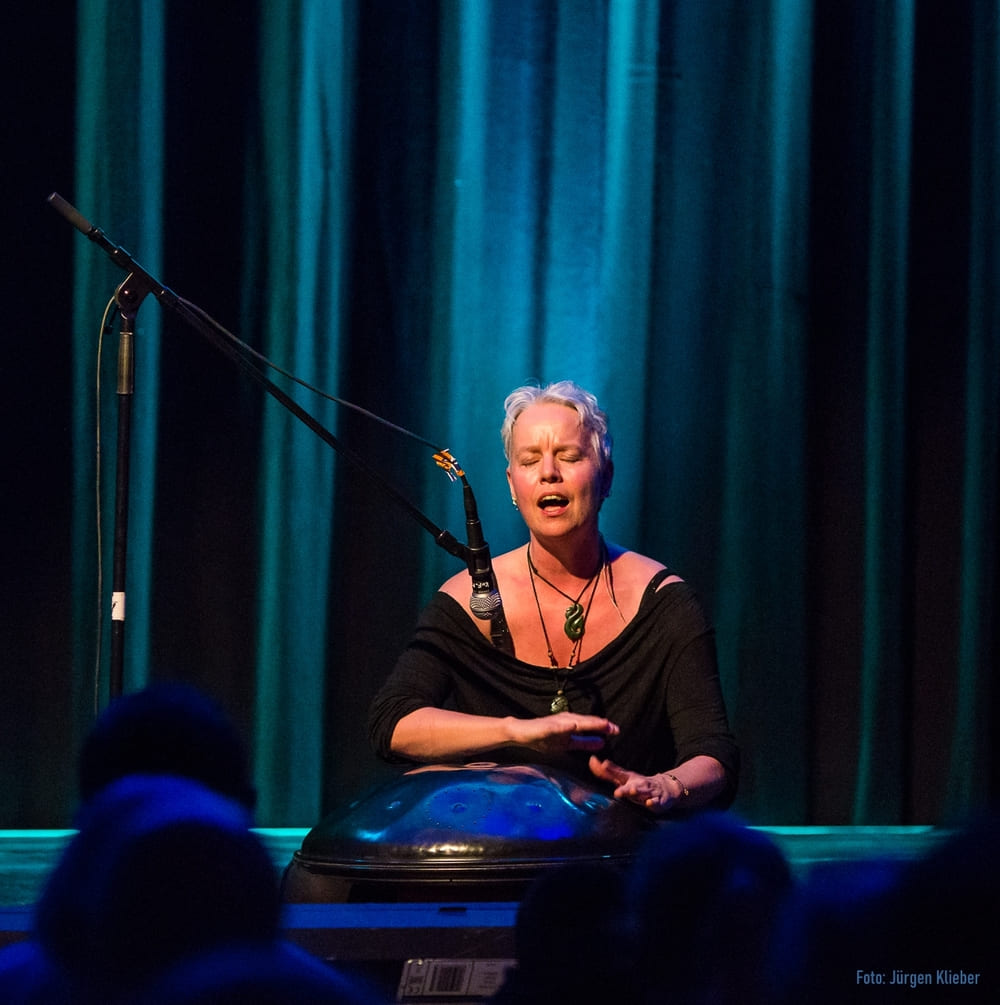 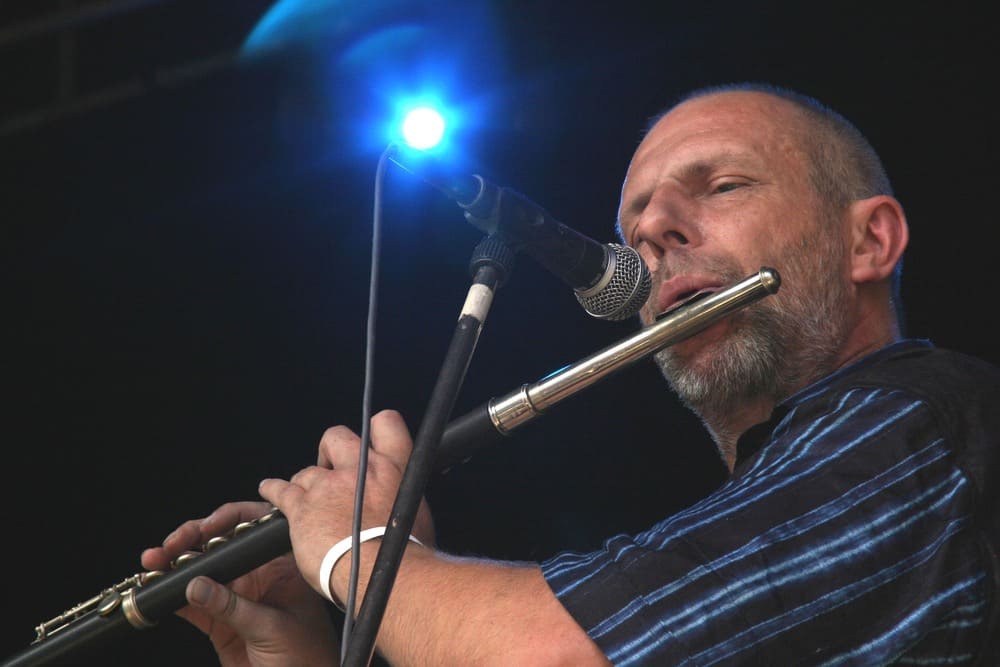 – from Nuremberg
– studied at the Nuremberg Conservatory, but much more with
great musicians all over the world
– plays wooden transverse flute, quena, dizi, grande walata, bass transverse flute,
Fula flute, Willow flute, tin-whistle, djembe, dundun, balafon,
vibraphone, ukulele and also sings with great pleasure
– plays musically everything that is fun, with (I’d love to!!) – but
also without – handpan included
– toured all over Europe and in South and West Africa during the last 40 years
– CD + radio productions with his own band “Argile”, solo, as
flutist in duo with hand pan players like Rainer Rabus or Edda B. and as
Guest musician at many other productions with internationally known
artists
– Author at the Bavarian Radio for the series “Music of the World
– Organizer of festivals and concert series (Rock gegen Rechts,
Snowball, Afro Autumn Nuremberg, Africa Cultural Days Forchheim, Oberthulba
and Nuremberg, Nuremberg Night of Spiritual Songs and many more)

How did the festival come about in the first place? Well, in the beginning was the hand pan. I got to know the Hang (then the original from Switzerland) in 1999 at the Tanz- und Folkfestival in Rudolstadt (now Rudolstadtfestival). There the makers from Switzerland presented their new instrument and I was immediately blown away. But it was to take more than 10 years until I was offered a hand pan for sale at the Bardentreffen in Nuremberg and “hit” it, so to speak. That was 2012 and the handpan was a Caisa Cosma (d minor) by Bill Brown. For a long time the Pan and I had a unique selling point here. The Handpans were rare, exotic and expensive and extremely fascinating for players and listeners. This fascination has lasted until today. Although there are now many hundreds of manufacturers worldwide, and recently the large commercial music industry has started to take notice of the instrument. Dieter Weberpals, with whom I organize the Handpan Festival, has been an active world musician far beyond the Franconian borders for decades. His musical openness for different styles makes him always break new ground. His main hobbyhorse is certainly African music and rhythm. He teaches drums and flute and is the overhead of one of THE world music bands par excellence: “Argile”. Since 2016 we have been working together as a duo project. Sometimes together with other musicians and always open for all wonderful musical directions. Weberpals has already had the handpan as a theme in his radio shows at the Bayerischer Rundfunk several times. Even though he is not a handpan player himself (which will certainly change in the future), he is fascinated by the percussive and melodic possibilities of pan. Out of this common fascination for this instrument, the joint CD “Handpan Meditation” with Edda B. was released in 2019. (pan, vocals, percussion, bass), Dieter Weberpals (flute), Freddi Rösler (bass and recording) and Jürgen Huck as guest. Initially only intended as a CD presentation, it eventually grew into the 1st Handpan Festival Nuremberg. To make a Handpanfestival has been slumbering in the minds of me and Dieter for a long time, but how can you manage something like that? Too much effort for two busy people and many other concerns like financial risks etc. Is anyone interested in such a festival here at all? Oh yes, they were interested – and how! The thing more or less became independent and we surfed the wave as good as we could – and it went damn good for the first time! More workshops? Ok we do. Hand panda raffle? We can do it. One more day? Check. Thanks to the motivation of some good friends and the fantastic artists who agreed to play, to help and to give workshops, we had a lot of fun and touching, rousing musical experiences. THANK YOU all again! Some critics said that it was too much concert and too little festival. But let’s be honest: why not take other paths? We want to organize a Handpan festival with world music. Or maybe a world music festival with a focus on handpan? In any case a festival for people who want to be spoiled by honest, handmade music. A festival that also works for more “sedate” fans, who don’t necessarily want to dance naked in the mud anymore (yes, it’s nice, you can do that too – of course…) A festival for musicians and visitors who don’t think in pigeonholes but want to experience new and unusual things. In short: to be open and tolerant. Concerts, workshops, gatherings and lots of space for exchange, making contacts and experimenting – that’s what our festival offers. Why doesn’t the festival take place in summer? Of course, a festival in summer is especially pleasant when the weather is fine. But the choice was made very deliberately at the end of the year. On the one hand, the Handpanfestival Nuremberg is weather-independent and therefore 100% safe (no cancellations/risks due to bad weather or similar), and on the other hand, there are simply hardly any alternatives during this time according to the motto: Where do I go now? With the new location “Kulturwerkstatt auf AEG” a wonderful place has been found where all three days with everything will take place. At the 1st festival, different venues had to be booked because the demand became so great that it didn’t work out at the same place. This is now perfectly solved “on AEG”. If the weather is fine there is even a nice outdoor area. Within walking distance is the meadow ground. The subway stops directly in front of the door and there are own parking lots. So perfect conditions for a chilled event.
We are really looking forward to the 2nd festival from 13.-15.11.2020 and are curious how it will develop. Many great musicians have already confirmed their participation.
Have a good year 2020 and see you soon,
Yours Edda

Buy your ticket for 2020 here!
Cookie-Zustimmung verwalten
We use cookies to optimize our website and our service.
Manage options Manage services Manage vendors Read more about these purposes
preferences
{title} {title} {title}